The best-selling album of Chet’s lengthy career! Having set up a home studio in the ‘50s, he would lay down backing tracks at RCA with session musicians, then work at home on his own with unlimited freedom to refine–the genesis of Chet Atkins’ Workshop! Pressed on premium RTI vinyl, from the original masters! The album reflected the continued diversity of his repertoire and ongoing flair for experimentation. Jazz standards like George Shearing’s “Lullabye of Birdland” coexisted with traditional country themes such as “Hot Mocking Bird.” “Lambeth Walk,” written for a 1937 Broadway musical, featured the octave work Chet used on occasion. Pop and jazz orchestras had recorded “Sleep,” but so did Les Paul and sax great Earl Bostic. Chet’s original ideas, infused into a swinging arrangement of Irving Berlin’s “Marie,” gave it a dimension beyond the 1937 Tommy Dorsey Orchestra hit. Les Paul had covered the 1930 pop ditty “Goofus” but Chet made it his own. The ballad “Bonita” came from his fingerpicking pal Spider Rich. Atkins always wanted records he produced to have wide appeal, and did that masterfully with Chet Atkins’ Workshop, the best-selling, most accessible album of his career, embraced by country fans and upscale fans of hi-fi instrumentals—one that revealed his perfectionism—and how he achieved it. Pressed on premium RTI vinyl, from the original masters! Redeye 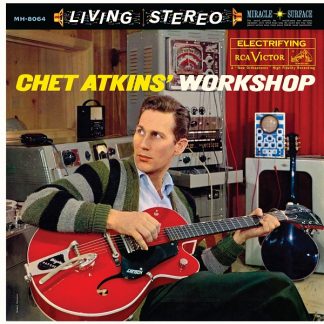