Product description
Join Barbie and Ken as they beam aboard the U.S.S. Enterprise NCC-1701 commemorating the 30th Anniversary of the classic Star Trek Series! Ready for any mission, Barbie is outfitted with an authentic Star Trek uniform. Her badge and red uniform denote her status as a member of the ship’s engineering section. She carries a replica of a tricorder, the multipurpose scientific and technical instrument that incorporates computers, sensors and records in a convenient handheld device. She also carries a replica of a communicator allowing he to contact other Starfleet personnel. Ken wears a gold jersey and badge indicating his position in the Command division. He carries a replica of a phaser – an acronym for PHASed Energy Rectification – which is a directed energy weapon used by Starfleet personnel. Lieutenant Barbie and Commander ken join the internationally renowned original crew of the U.S.S. Enterprise: Captain James T. Kirk, First Officer Spock, Dr. Leonard “Bones” McCoy, Chief Engineer Montgomery “Scotty” Scott, Helmsman Hikaru Sulu, Communications Officer Uhura and Navigator Pavel Chekov on a special voyage. In the 30 years since it first aired, Star Trek has inspired generations of fans with Gene Roddenberry’s belief that people of various races, genders and planetary origins can work together to build a constructive future for all mankind. 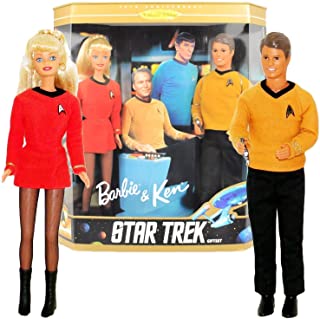