Book Condition: Used Very Good Plus (VG+) Big and Rich: All Access (Book & DVD) Hardcover – Bargain Price, June 5, 2007 by John Rich (Author), Big Kenny (Author), Allen Rucker (Author) The fully authorized, uninhibited, all-access, entirely true story of how Big & Rich are taking over country music. Big & Rich have taken country music by storm since their 2004 debut album A Horse of a Different Color, and they’ve done it on their own terms. Their unique, eclectic music style, a blend of popular country with rock and hip-hop, challenges country music tradition. Co-founders of the MuzikMafi a, they have launched not only their own careers, but those of groundbreaking artists such as “Redneck Woman” Gretchen Wilson and Cowboy Troy, the first African-American country rap artist. In a style as creative and irreverent as their music, this official book will give fans a backstage pass to Big & Rich, from the duo’s early days in a Nashville dive to their controversial movement for a new sound in country music. About the Author BIG KENNY is a singer/songwriter and native of Culpeper, Virginia. He now lives with his family in Nashville. When he’s not on stage, he’s taking in the scenery on his Harley or composing poetry and musicals, or recording pirate songs with his son, Lincoln. JOHN RICH is a singer/songwriter from Amarillo, Texas. He currently lives in Nashville with his best friend, an American bulldog named Frank “the Tank” Sinatra Rich, and spends time shooting skeet off his back porch with his World War II veteran grandfather. Product details Hardcover: 256 pages Publisher: Center Street (June 5, 2007) Language: English 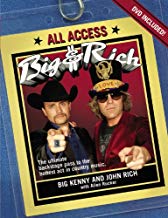