Description
Green vinyl limited to 500. Black Moth rose from the Leeds underground scene at the end of the last decade, indulging their love for both Sabbath sulphur and Stooges squalor. Their 2012 debut ‘The Killing Jar’ effortlessly transcended its in-fluences to arrive at a nefarious and turbulent brew, equal parts horror movie at-mosphere, thunderous drive and maverick spark, with Harriet Bevan’s biting and beguiling voice leading the charge – and was hailed by many as ‘one of the best debut album’s you’ll hear all year’ . Now with an expanded lineup to increase the riffage comes their follow up. Pro-duced like their first by Jim Sclavunos, it takes their kaleidoscopic heaviosity and sepulchral style to a whole new plateau. Riff-driven dementia, swirling together 60s garage rock bite, head-spinning psychedelia and punk grit.
EYE 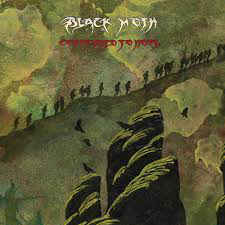