Hailing from NYC, The Blues Magoos took the folk/blues soundtrack of their mid-sixties Greenwich Village contemporaries and forged it into a tough, garage/psych hybrid that attracted fans as quickly as it angered folk club owners, incensed by the band’s volume and unhinged stage show! Signed by Mercury Records in 1966, their inaugural single for the label, a reading of John D. Loudermilk’s “Tobacco Road,” was a churning 4 1/2 minute(!) plunge into crazed guitar/organ/drum/bass pyrotechnics with vocals careening over the top. The release hailed the arrival of a new and wholly unique voice on the rock scene. It was also a signpost for a new genre. One of the first albums to use “psychedelic” in the title, it arrived right on time for a generation ready to expand their consciousness with the aid of their turntables. The album’s next single, band-penned “(We Ain’t Got) Nothin’ Yet,” featured one of the all-time great riffs, an insistent bass run over which keyboards swirled and unison vocals chanted. An absolute smash, “(We Ain’t Got) Nothin’ Yet” zoomed to #5 on the national pop charts and made the band an exotic household name. In total, The Blues Magoos released three amazing albums and eight incredible singles on Mercury. Longtime fans, Sundazed has now gathered all sixteen A- and B-sides together on The Blues Magoos: Mercury Singles (1966-1968). Featuring the accurate, original mono single mixes from the Mercury masters, these songs have NEVER sounded better! Also available on compact disc! Track Listing: Side A: 1. Tobacco Road 2. Sometimes I Think About 3. (We Ain’t Got) Nothin’ Yet 4. Gotta Get Away 5. Pipe Dream 6. There’s A Chance We Can Make It 7. One By One 8. Dante’s Inferno Side B: 1. I Wanna Be There 2. Summer Is The Man 3. There She Goes 4. Life Is Just A Cher O’Bowlies 5. Jingle Bells 6. Santa Claus Is Coming To Town 7. I Can Hear The Grass Grow 8. Yellow Rose Redeye 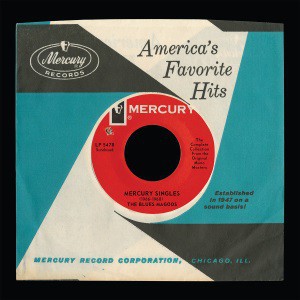