Description In a special arrangement with Spinout Records “The Throwaway Age”, as heard in the Warner Brothers Motion Picture “”Inherent Vice” We’re incredibly proud to let you know that one of Sundazed-owner Bob Irwin’s compositions and recordings is featured in the new Warner Bros. motion picture, “Inherent Vice”!!! Written and directed by filmmaker Paul Thomas Anderson (from the novel by Thomas Pynchon), the highly-anticipated movie features Joaquin Phoenix, Josh Brolin, Owen Wilson, Reese Witherspoon, and tons of others. It opens nationally on January 9th. Bob’s recording of “The Throwaway Age” is featured in the film alongside songs by Neil Young, Radiohead, Can, The Association, and others… To paraphrase a couple of pretty cool outfits from the ’60s, please allow me to re-introduce you to the man you’ve known for all these years…Bob Irwin has spent over two decades making the dream of a lifetime, Sundazed Music, a reality. And now–with Sundazed universally lauded as the premier ’60s reissue record label in the world–Irwin is knee-deep in chasing something else that’s been driving his dreams since he first picked up a guitar as a “proverbial knee-high”: playing the six-stringed instrument like nobody’s business. Irwin launched Sundazed Music in 1989, a record label thriving greatly these days, thanks to his marketing savvy, when an army of others have lost their way. Sundazed, based in New York and Nashville, has kept alive the crucial vintage releases of a legion of hall of fame legends from the worlds of garage-rock, surf, R&B, rockabilly, country and jazz. Among hundreds and hundreds of revered Golden Age artists calling Sundazed home over the years are: the Byrds, Buck Owens, Dick Dale, Iggy Pop, Johnny Cash, Otis Redding, Yardbirds, Nancy Sinatra, Paul Revere and the Raiders, Hollies, Moby Grape and the Trashmen. As if Sundazed weren’t enough to scratch the itch of world domination in the field of ’60s music, Irwin has also spent years as one of the chief producers for Sony/Legacy, whipping into shape the sprawling back catalogues of Simon & Garfunkel, Janis Joplin, Santana, Jefferson Airplane, the Lovin’ Spoonful, Donovan and many, many others. And now Bob Irwin is releasing new recordings by a guitar player good enough to rub shoulders with any of the heroic string-benders he’s nurtured over the years: Bob Irwin, himself. As Dandy Don Meredith of Monday Night Football fame once put it, if you can do it, it ain’t bragging.” And Bob Irwin can, most certainly, do it with his boss new seven-inch release from the très cool Spinout label, a perfect home to gritty combos like Los Straitjackets, Deke Dickerson and the Kaisers. Backed by his New York pals, the Pluto Walkers, Irwin digs deeply into the reverb-laced, big-guitar universe of fretboard wizards like the Ventures, Al Caiola and Billy Strange, and comes up with the twang-filled goods. It’s a magical sound: haunting music just crying out to be used in silver-screen indie-films or during crucial moments of captivating TV blockbusters everyone will be talking about tomorrow morning around the water cooler. Get on board early, so you can say after it happens: I knew these guys were going to be huge! Because you’ll be absolutely right. -Jud Cost, Magnet magazine “Yup, a vinyl 45 and from the man behind the excellent 1989-founded Sundazed label. ‘A’ side is an excellent version of one of my favourite Ventures originals this time from their whirlwind “Batman” 1966 album and Bob & the boys do it proud recreating the original’s menacing growl. The flip is a delightful gentle, exotica-feel track much reminiscent of tunes like “Moon Of Manakoora”. Great guitars and everything else for that matter, we can only ask Bob, why did it take so long? Loved it.” Gandy Dancer magazine Irwin, Bob and the Pluto Walkers – Joker’s Wild b/w The Throwaway Age (7″ Vinyl) Catalog # : SI-SPIN-023 Artist : Irwin, Bob and the Pluto Walkers UPC : 662222002370 Label : Spinout Records Street Date : 4/1/2017 Genre: Rock Style: Surf, Instrumental, Rock & Roll EYE 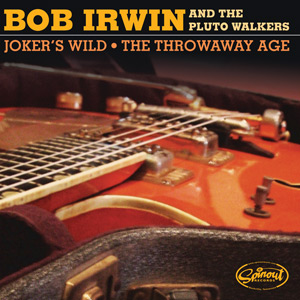