Bonniwell Music Machine, The – The Bonniwell Music Machine (Limited Olive Green (Vinyl) Catalog # : LP-RGM-0970LE Artist : Bonniwell Music Machine, The UPC : 848064009702 Label : Real Gone Music Street Date : 3/6/2020 Description The music business is replete with stories of outsized talents who, due to label mismanagement, misguided career advice, or just plain bad luck, never got their due. But the story of Sean Bonniwell is one of the saddest. He and his band The Music Machine broke through in 1966 with “Talk Talk” and the accompanying album (Turn On) The Music Machine. Because the record came out on the thinly-resourced Original Sound label, though, tour support, promotion, and, most importantly, royalties were in short supply, causing the band to disintegrate in short order. Undeterred, Bonniwell had the group’s contract transferred to Warner Bros., and, after recording a few tracks for the next album with the original line-up, basically started from scratch with session musicians, naming the band and the album The Bonniwell Music Machine to acknowledge the fact that the record had become a solo project. After the first two singles (“Double Yellow Line” and “The Eagle Never Hunts the Fly”) tanked, Warner Bros. lost interest and the album, which finally came out in February 1968, was deleted not long thereafter (after recording a solo release for Capitol, Bonniwell left the music business altogether). Interest in the record bubbled under for years in esoteric collector circles, but for most of the music cognoscenti, the 2014 release of The Bonniwell Music Machine on CD by Ace Records’ Big Beat imprint came as a revelation. Here was an album that retained the pop-punk fire of “Talk Talk” yet, with each track, branched off into completely unexpected directions including folk-rock and orchestrated chamber pop. And Bonniwell’s lyrics explored dark psychological themes with Morrison-ian aplomb without the accompanying pretense. Now, Real Gone Music is very, very proud to present the FIRST-EVER VINYL REISSUE of The Bonniwell Music Machine, in an olive green pressing limited to 900 copies. Absolutely positively a ‘60s classic! 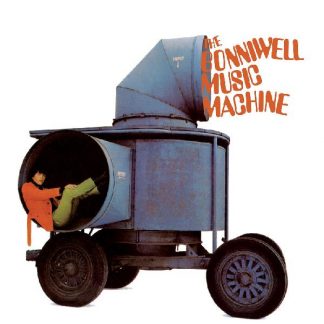