AVAILABLE AGAIN ON VINYL!!! “Recorded in one afternoon in the Holly Springs, Mississippi, hometown of 69-year-old blues great RL BURNSIDE, A Ass Pocket of Whiskey documents a single noisy, spirited session with Burnside, his sideman KENNY BRWON, and the punk-bred blues reconstructionist trio called the JON SPENCER BLUES EXPLOSION. The pairing of JSBE, led by a white Ivy League dropout turned downtown New York scuz who poses as a hard-living blues rocker, and RL Burnside, the last of the real down-home badass bluesmen of the Mississippi hills, is strange—perhaps sacrilege to blues purists—but oddly appropriate. And the moments of pure musical chaos caught on this record—both cross-cultural and cross-generational—sound entirely within the realm of both acts. With its unorthodox accompaniment (including wheezy theremin and Spencer’s trademark shouts), the album is probably not the most fitting introduction to Burnside. But as the oldest man ever to record for the hip indie-rockers at Matador, no doubt he gladly sacrificed juke-joint obscurity for the chance to appear on MTV’s 120 Minutes.”—Roni Sarig Ass Pocket of Whiskey Artist: R.L. Burnside Format: LP Release Date: 2/3/2009 LABEL: Fat Possum Records UPC: 767981102610 Genre: Rock, Blues Style: Blues Rock, Delta Blues, Modern Electric Blues Tracklist A1 Goin’ Down South A2 Boogie Chillen A3 Poor Boy A4 2 Brothers A5 Snake Drive A6 Shake ‘Em On Down B1 The Criminal Inside Me B2 Walkin’ Blues B3 Tojo Told Hitler B4 Have You Ever Been Lonely? 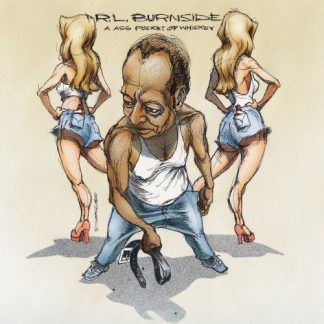