Carl Barat And The Jackals ‎– Let It Reign

Originally intended to be the second solo album from Carl Bart, Let It Reign became the first full-length from the former Libertine and his new band the Jackals. It was a wise move to make this album a band effort – Bart’s self-titled 2010 offering fell victim to the indulgence that often plagues the solo ventures from members of acclaimed groups. To be fair, Carl Bart arrived at a time when he may have felt it necessary to distance himself from the Libertines’ legacy; while he was making this album, the Libs were playing sold-out reunion shows and preparing to make new music. Let It Reign reflects that the Jackals offer Bart a different kind of camaraderie than his other band does (it’s also worth noting that he recorded most of the album before finding his new bandmates via a Facebook post). It’s clear that he can still kick up a racket, and songs such as the storming “Victory Gin” and “The Gears” are thrilling for Libertines fans who have been waiting years for him to tear things up. However, there’s a weariness to Bart’s meditations on friendship on “Summer in the Trenches” and the brassy, conflicted “War of the Roses” that set them apart from his earlier work. Let It Reign’s best moments make the most of this sadder but wiser frame of mind, whether on ambitious, fiery songs like “Glory Days” and “March of the Idle” or the philosophical closer “Let It Rain,” where Bart sighs “No, I don’t have the strength to accept what I can’t change.” While he may ultimately need Pete Doherty as a sparring partner to bring out his best (and vice-versa), this is the finest music he’s made without the Libertines. Let It Reign’s appealing mix of nostalgia and vitality proves that Bart can not just survive, but thrive outside of the confines of his other, storied band. – Heather Phares. Label: Cooking Vinyl ‎– COOKLP611 Format: Vinyl, LP, Album Country: Europe Released: 16 Feb 2015 Genre: Rock Style: Indie Rock Tracklist A1 Glory Days 3:43 A2 Victory Gin 3:55 A3 Summer In The Trenches 3:03 A4 A Storm Is Coming 3:59 A5 Beginning To See 3:47 B1 March Of The Idle 3:40 B2 We Want More… 3:34 B3 War Of The Roses 4:55 B4 The Gears 1:32 B5 Let It Rain 3:28 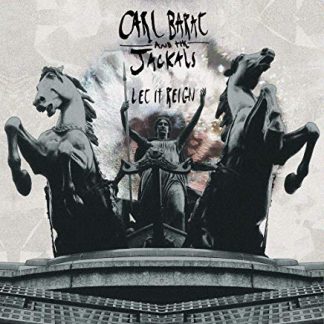 You're viewing: Carl Barat And The Jackals ‎– Let It Reign $15.98
Add to cart