Every once in a while a show comes along that captivates the hearts of its audience in a special way. Now, remastered and available on DVD for the first time ever, the best of “The Magic Garden” starring Carol & Paula are compiled on one DVD set. This three DVD set features 10 original half hour episodes of the most successful regional show in the history of children’s television. ”

Product description
Welcome to The Magic Garden, the most successful regional show in the history of children s television!
Every once in awhile, a show comes along that captivates an audience in a special way. The Magic Garden
was a phenomenon that aired nationally via syndication and on New York sWPIX from 1972-1984. It was
immediately embraced by a large, devoted audience of children, parents and grandparents, many of whom
remain loyal to this day. The show featured the always delightful and entertaining Carole & Paula and their
loveable friends Sherlock & Flapper.

A generation of children and their families love and remember this show and have clamored for this first
DVD package. The long wait is over! At last, Carole And Paula In The Magic Garden is here for fans new
and old. This 2-Disc DVD plus 1 CD collection contains 10 of the best episodes from The Magic Garden s nearly
13-year run on television.

Parents who complain they don t make children s shows the way they used to will be delighted to find that
today s children are as entranced by this lovely show as they were during its original television days. Here is
a 70 s classic for all to enjoy. So, come back and enjoy the memorable songs, the games, the Chuckle Patch s
jokes, and the Story Box s tales as we take you back to The Magic Garden. 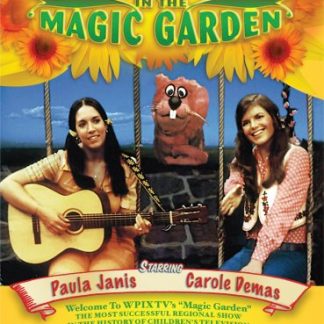