The Inner Mystique, the hypnotic second album by the Chocolate Watch Band, takes up exactly where its sacred predecessor left you: looking for your perfect match at the local Love-In. When Watch Band lead singer par excellence Dave Aguilar grabs you by the lapels and tells you “I’m Not Everybody Else,” you have no choice but to believe him. He’s not. And when he cools down enough to extol the virtues of “Medication,” who could doubt his sincerity? Especially when he stokes the fires to the boiling-point where medication may not really make much difference. But the real stunner here is the Watch Band’s exhilarating cover of Bobby D’s “It’s All Over Now, Baby Blue.” In typical CWB interpretive bliss, nobody has ever done this hallowed song any better. Not Bob Dylan, not Van Morrison. Nobody. A San Jose, Calif. band whose reputation has grown exponentially over the decades, the Chocolate Watch Band are now revered as one of the Seven Wonders of the World of garage rock. Spotlighting the classic lineup—the inflammatory vocals of Dave Aguilar and the roof-rattling guitars of Mark Loomis and Sean Tolby, fronting the rock-solid bass of Bill Flores and the letter-perfect drums of Gary Andrijasevich—the Watch Band’s first two albums have it all. Stones swagger snake-hips its way through cosmic significance with just a dusting of eye-opening psychedelic legerdemain to make your neck snap backwards in pure joy. LP-SUND-5307 UPC : 090771530714 Street Date : 4/1/2017 Genre: Rock Style: Psychedelic Rock Tracklist: A1 Voyage Of The Trieste 3:39 A2 In The Past 3:08 A3 Inner Mystique 5:34 B1 I’m Not Like Everybody Else 3:43 B2 Medication 2:04 B3 Let’s Go, Let’s Go, Let’s Go 2:16 B4 Baby Blue 3:14 B5 I Ain’t No Miracle Worker 2:51 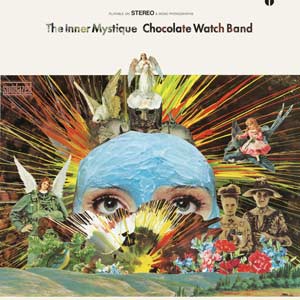 You're viewing: Chocolate Watchband, The ‎– The Inner Mystique (Vinyl) $24.98
Add to cart