Eric Coates – For Your Delight

Editorial Reviews
2009 release. Now highly praised alongside Elgar, Delius and other select British `niche’ composers, Eric Coates won world renown during his own lifetime. The son of a Nottinghamshire country doctor, he began with at least two of the right elements: an uncommon flair for melody allied to outstanding musical proficiency. Graduating from professional instrumentalist first to `balladeer’ then orchestral conductor, having once raised `light music’ as his banner, Coates devoted the rest of his life to exploring and paving its many byroads. 19 tracks. Bygone Days.

Track Listings:
1. In Town Tonight, for pops orchestra (Foxtrot arrangement of ‘Knightsbri
2. By the Sleepy Lagoon, valse serenade for orchestra
3. Over to You, march
4. Symphonic Rhapsody on I Heard You Singing and Bird Songs at Eventide
5. For Your Delight, Serenade
6. London Bridge, March
7. Song of Loyalty (The Prayer Within our Hearts)
8. No. 2. The Man About Town
9. Television March
10. No. 3. At the Dance
11. Summer Afternoon, idyll for orchestra
12. Oxford Street, march for orchestra (No. 1 from “London Again” Suite)
13. Westminster, meditation for orchestra (No. 2 from “London” suite)
14. No. 3. Valse
15. No. 4. Rhythm
16. Sound And Vision, march for orchestra
17. Wood Nymphs (Valsette)
18. Footlights (Concert waltz)
19. The Dam Busters, march for the film score 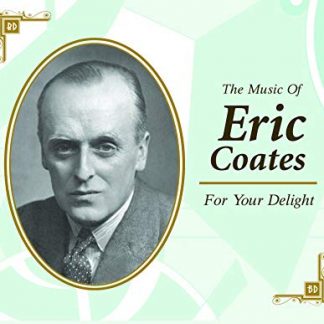 You're viewing: Eric Coates – For Your Delight $9.98
Add to cart