Jackie Wilson – So Much

Description EU-only 180gm vinyl LP pressing including two bonus tracks and digital download. This quintessential release includes Jackie Wilson’s sensational third LP, SO MUCH, originally issued by the Brunswick label in 1959, and long unavailable on vinyl. Produced and arranged by Dick Jacobs, the album contain some of Wilson’s greatest studio recordings from the beginning of his career. It was cut to capture some of the memorable performances which had been exciting thousands of patrons of the R&B circuit. SO MUCH opens with the rocking title track. The album also contains some outstanding tunes by the tandem of Berry Gordy and Billy Davis (also known as Tyran Carlo), such as ‘Thrill of Love’, and ‘I’ll Be Satisfied.’ Other standouts include ‘Talk That Talk,’ and ‘The Magic of Love.’ Wilson is inspired on just about every track. There is no filler. He trills, he growls, he uses melisma, he skirts to the top of his range with his effortless ease and surprising dramatic effect. His grunts and growls on ‘Happiness’ embody the title, while ‘Doggin’ Around,’ with it’s tinkling piano, heightens the tension. On tracks like ‘I Know I’ll Always Be in Love with You’ (sung in a style similar to Sam Cooke) and ‘Never Go Away’ his performances are so convincing that Jackie even makes the bombastic production sound cool. Wilson also sings one of his own compositions, ‘Wishing Well.’ in addition to the original masterpiece, this WaxTime collector’s edition contains 2 bonus tracks from the same period: A soulful mid-tempo, ‘Years from Now,’ and the joyful ‘Am I the Man.’ One of the pioneers and most important singers in rock and soul music, there’s no better proof of Jackie Wilson’s talents than these joyful, consistent, stylish and exuberant recordings. Label: WaxTime ‎– 772009 Format: Vinyl, LP, Stereo Country: Spain Released: 2015 Genre: Rock, Funk / Soul Style: Rock & Roll, Rhythm & Blues, Soul Tracklist Show Credits A1 So Much A2 I Know I’ll Always Be In Love With You A3 Happiness A4 Only You, Only Me A5 The Magic Of Love A6 Wishing Well A7 Years From Now B1 Talk That Talk B2 Ask B3 I’ll Be Satisfied B4 It’s All Part Of Love B5 Never Go Away B6 Thrill Of Love B7 Am I The Man MVD 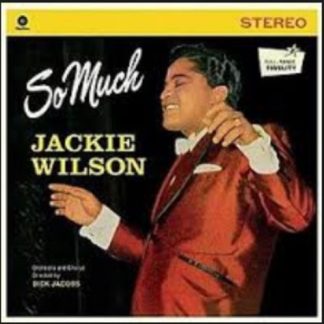