Vinyl LP pressing. From the minute he walked into Sun Studios, Johnny Cash began a legendary career that would see him become one of the biggest and most influential musicians of our time. Though only on Sun for three years from 1955-1958, Johnny made some of his most legendary recordings there. When he moved on to Columbia Records, Johnny left behind a large cache of material which Sun happily compiled and released on LPs throughout the 60’s, mixing Cash’s singles-sides with previously unissued recordings. The resulting platters were a goldmine for fans eager to hear more from country’s newest superstar. From the original Sun masters, featuring many raw, in-the-studio sides (sans overdubs) – the Man in Black has never sounded better! For what would be his 10th album release, Sun continued to mine it’s deep reservoir of Cash recordings for Now Here’s Johnny Cash. Inaugural single “Hey Porter” makes it’s first LP appearance and signals a recurring theme for Cash’s songs, trains and the American railroad system. It also contains a cover of Don Gibson’s “Oh Lonesome Me,” which hit #13 on the Country Singles Chart and #93 on the Pop Singles Chart. Though well into his Columbia career at this point, Sam Phillips and Sun continued to be a major part of Cash’s success. 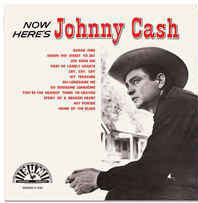