Description All-instrumental LP from the guitarist idolized by Eric Clapton, Peter Green, Stevie Ray Vaughan and many others. 180 Gram Vinyl Pressed at R.T.I. Freddie King’s second all-instrumental album, Freddy King Gives You a Bonanza of Instrumentals, originally released in 1965 on King Records’ Federal subsidiary, continued the artist’s winning streak, with such memorable King originals as “Manhole,” “Freeway 75,” “Low Tide” and “Funnybone.” The 12-song LP demonstrates once again why King was one of his generation’s most revered electric guitarists. Although his career was tragically cut short by his death at the age of 42, Freddie King was one of America’s most distinctive and influential electric blues guitarists, leaving an indelible mark on more than one generation of guitar superstars, including Eric Clapton, Stevie Ray Vaughan and the Rolling Stones’ Mick Taylor. The Texas-born axeman began playing guitar at the age of six, and in his teens moved with his family to the South Side of Chicago, where he was inspired by witnessing club gigs by such seminal electric bluesmen as Muddy Waters, Jimmy Rogers and Elmore James. Originally billed as Freddy King, he began recording in 1957, revealing a massively influential style that merged his Texas and Chicago influences, and soon achieved commercial success with a series of infectious instrumental hits. Sundazed Music’s new vinyl edition of this electric blues landmark has been sourced from the original mono master, and pressed on 180-gram vinyl. It features an exact reproduction of the original LP cover art.. King, Freddy – Freddy King Gives You a Bonanza of Instrumentals (Vinyl) Catalog # : LP-SUND-5365 Artist : King, Freddy UPC : 090771536518 Label : Sundazed Music, Inc. Street Date : 4/1/2017 Genre: Funk / Soul, Blues Tracklist A1 Surf Monkey A2 Low Tide A3 Remington Ride A4 King-A-Ling A5 Manhole A6 Fish Fare A7 Funnybone B1 Cloud Sailin’ B2 The Sad Nite Owl B3 Nickleplated B4 Freddie’s Midnite Dream B5 Freeway 75 B6 Side Tracked B7 Wash Out B8 Driving Sideways B9 The Untouchable Glide 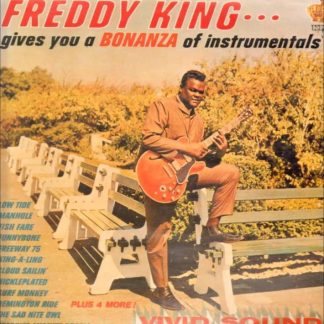 You're viewing: Freddy King – Freddy King Gives You a Bonanza of Instrumentals (Vinyl) $26.98
Add to cart