Live at the Fillmore East: A Photographic Memoir (Book)

From 1968 to 1971 Bill Graham’s Fillmore East in New York City was the East coast Mecca for the music that shaped a generation. Not only that: thanks to a visionary technical staff and unsurpassed psychedelic light shows, the Fillmore East stage was the place where rock music became rock theater. Now available in paperback, the highly acclaimed Live at the Fillmore East tells the story of its heyday with more than 200 black and white behind-the-scenes photographs and exclusive interviews. Included here are photos of the Who’s premiere of Tommy in 1969; John and Yoko’s surprise encore to a Frank Zappa concert; the jam between the Allman Brothers, the Grateful Dead, and Mick Fleetwood in 1970; Janis Joplin’s first performance after singing with CBS records; Jimi Hendrix’s New Year’s Eve concerts; Van Morrison during the first-ever television taping of a rock concert in 1970; and many other defining moments of rock history “Amalie R. Rothschild’s pictures bring back the entire Fillmore East experience in vivid detail. Rock and Roll was a baby back then and Bill Graham was it’s midwife – he birthed the modern version of a rock and roll concert.” — Mickey Hart 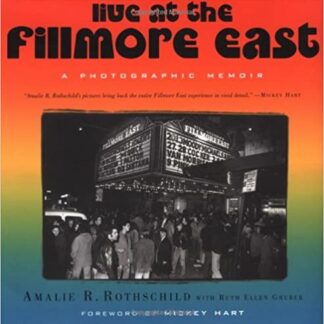 You're viewing: Live at the Fillmore East: A Photographic Memoir (Book) $98.99
Add to cart