Description While “Cowboy Outfit” has a slightly different meaning as UK Slang, Nick Lowe and His Cowboy Outfit marks a turn towards a more rootsy persona for our hero. Anchored by the international number one “Half a Boy and Half a Man”, the album introduces a tex-mex/roller-rink organ sound, although the lineup of Bobby Irwin, Paul Carrack, Martin Belmont and Lowe is essentially unchanged. Newly discovered Johnny Horton covers “Honky Tonk Hardwood Floor” and “Walk on By” (included here as bonus tracks) show that there may have been a more twangy intention to the record– but as it is full on rockers like “Maureen” and Mickey Jupp’s “You’ll Never Get Me Up (in One of Those)” rub shoulders with pop like Dusty Springfield’s “Breakaway” and Nick’s own “L.A.F.S.” (featuring the TKO Horns who had recently punched up arranger Elvis Costello’s own “Everyday I Write the Book”). Lowe, Nick – Nick Lowe and His Cowboy Outfit (Vinyl) Catalog # : LP-YEP-2400 Artist : Lowe, Nick UPC : 634457240018 Label : Yep Roc Records Street Date : 8/25/2017 Genre: Rock Style: Rock & Roll, Pop Rock, Rockabilly Tracklist A1 Half A Boy And Half A Man A2 Breakaway A3 You’ll Never Get Me Up (In One Of Those) A4 Love Like A Glove A5 The Gee, And The Rick And The Three Card Trick B1 (Hey Big Mouth) Stand Up And Say That B2 Awesome B3 God’s Gift To Women B4 Maureen B5 L.A.F.S. B6 Live Fast Love Hard C Honky Tonk Hardwood Floor D Walk On By 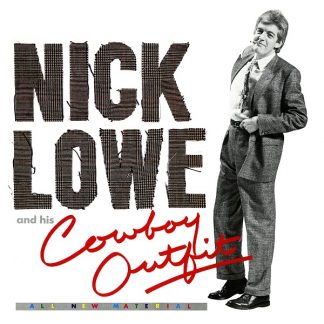