Metallica – And Justice For All (Remastered) (Vinyl)

And Justice For All
(Remastered)
Artist: Metallica

DESCRIPTION
Double 180gm vinyl LP pressing. Includes digital download. Digitally remastered edition… And Justice for All is the fourth studio album by heavy metal icons Metallica, originally released on August 25, 1988. It was the first Metallica studio album to feature bassist Jason Newsted after the death of Cliff Burton in 1986… And Justice for All was recorded in early 1988 at One on One Recording Studios in Los Angeles. It features long and complex songs, fast tempos, and few verse-chorus structures. The lyrics feature themes of political and legal injustice seen through the prisms of censorship, war, and nuclear brinkmanship… And Justice for All was acclaimed by music critics. It was included in The Village Voice’s annual Pazz & Jop critics’ poll of the year’s best albums, and the single “One” earned Metallica it’s first Grammy Award (and the first ever in the Best Metal Performance category) in 1990. 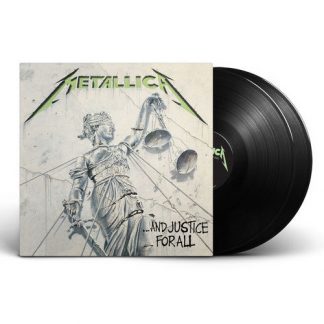 You're viewing: Metallica – And Justice For All (Remastered) (Vinyl) $32.98
Add to cart