Midnighters, The – Their Greatest Hits (Vinyl)

Shake ’em up! R&B from the vaults of King/Federal Records! The lascivious pen of Henry “Hank” Ballard was responsible for many risqué odes, including The Midnighters’ “Work With Me Annie,” “Sexy Ways,” and “Get It,” major R&B hits of the early ‘50s all included on 1956’s Their Greatest Hits! The FCC banned several of the band’s songs from airplay, which only made them that much more desirable for the growing teenage market, and this Sundazed edition—pressed on 180 gram audiophile vinyl at RTI—is the ultimate way to experience the best of the throbbing fury of this storied ensemble at its peak. GET IT! “The folks at Sundazed Records delved deep into the vaults of Syd Nathan’s Cincinnati-based King Records for a 180-gram album reissue of the 1957 debut album by Hank Ballard’s notorious crew, reissued with its original red-and-yellow cover art intact. Their Greatest Hits contains the raunchy classics Work With Me Annie and its sequel Annie Had A Baby, the R&B chart-toppers that put The Midnighters on the map in 1954 despite being banned from more than a few radio stations for their uncommonly earthy lyrics (Sexy Ways, also on board here, matches them and then some on that front). Ballard and his fellow Detroiters were rockers of the first order, torching Tore Up Over You and Switchie Witchie Titchie with the help of their resident guitar phenom Cal Green’s red-hot licks.” -Vintage Rock Magazine 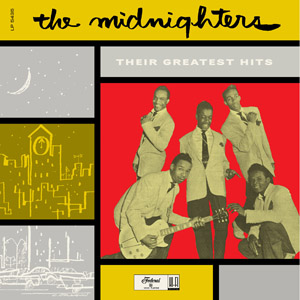 You're viewing: Midnighters, The – Their Greatest Hits (Vinyl) $25.98
Add to cart