DELUXE reissue of 1965 Aussie garage RARITY with bonus 7″ ep NOW ON LIMITED COLORED VINYL! 180 gram vinyl LP with bonus 7″ EP Though they have different approaches, a common thread runs through Australian bands like the Saints, Hoodoo Gurus, Midnight Oil and AC/DC: an aggressive, take-no-prisoners posture designed to grab audiences by the throat. This direct crowd-band interaction is essential on the rough-and-tumble Oz pub circuit, where if the group doesn’t deliver the goods, they’re likely to go down in a hail of lager cans. Whatever it is that puts the raw in Antipodean rawk, it’s been there from the beginning. For proof, check the wild, outrageous sounds of the Missing Links. Formed in Sydney in 1964, a series of personnel changes eventually replaced all original members, leaving vocalist Andy Anderson, guitarist Doug Ford, drummer Baden Hutchens, bassist Ian Thomas and Chris Gray on keyboards. It was this lineup that recorded the band’s 1965 debut album, The Missing Links. An instant garage punk classic, The Missing Links took the UK R&B combo model and drenched it in attitude and feedback, making contemporaries like the Troggs and the Who appear tame by comparison. The sonic guitar meltdown at the end of “You’re Driving Me Insane” presages Jimmy Page’s Zeppelin liftoff by a full three years while “Wild About You” defies description, except to say it still sounds shocking nearly 50 years on. This slice of vigorous vinyl became one of the most prized acquisitions for garage punk fans the world over, with each successive wave of Down Under musical malcontents spreading its legend. The globe trotting team at Sundazed has now restored the album in all its magnificent MONO glory! What more could you want? Well, how about the IMPOSSIBLY rare ep, The Links Unchained, featuring four more cuts of mid-Sixties madness!?! For a limited time, Sundazed is offering both of these audacious aural artifacts in one convenient package! Redeye 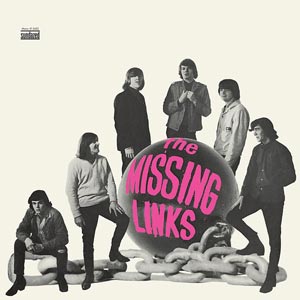