No Stoppin’ This Boppin’: Let The Good Times Roll by Bob Skurzewski and Terri Skurzewski

The rock and roll era was the teenagers’ “Perfect Storm.” It settled hard and fast in Buffalo with underlying currents of music, but in 1957 when WBNY-AM transitioned to the Top 40 music format, everything fell into place. No Stoppin’ This Boppin’ is a retrospective of Buffalo from 1950 through 1964 – when AM radio was King! Buffalo had many great DJ personalities. Every interview we did took us behind the scenes and showed how the broadcast industry worked, and how the jocks entertained with their on-air antics. You’ll be delighted by hit-making groups, singers, songwriters and musicians of the era. They talk about how it happened and how they enjoyed the ride. It was a glorious time in post-war America when everybody was under the spell of doo-wop, DJs, and favorite radio stations. About the Author Bob and Terri Skurzewski were born in Buffalo and are life-time residents of Western New York. They are members of Basics2Bylines- A WNY Writers’ Network and Terri is also a member of SCBWI and BNCWI. Bob writes about Buffalo broadcasting and related music of the 1950s to the 1963-pre-British Invasion. He collects vinyl records and interviews and researches many of the artists and radio broadcasters of that era. He’s written for numerous music-related magazines, such as Discoveries, Goldmine, Record eXchanger, Record Collector’s Monthly, and Rumble. Featured in “Oldies Stations Get Back in the Groove” (Anthony Violanti, Mar. 19, 2003, and “Oldies on the Airwaves – Gone but Not Forgotten” (Andrew Z. Galarneau, Apr. 30, 2006), in The Buffalo News (Buffalo, New York), Bob’s also been a guest on several local radio programs, addressing subjects of local artists, DJs, radio stations, record values and record collecting. He is a past member of the Buffalo Broadcast Pioneers and the Buffalo Music Hall of Fame and has contributed airchecks for PBS station WNED-TV’s (Buffalo, NY) program/fundraiser, Don’t Touch that Dial (December 2010). His monthly email newsletter was distributed to local and national broadcasters, active musicians, record collectors and music fans, reaching individuals in at least ten states and two other countries. Terri is a retired secretary and administrative assistant. Also a freelance writer of personal essays and science fiction stories for young girls, her most recent project is a series of picture books for children’s literature. She produced a newsletter for the American Cancer Society’s (Amherst, NY) volunteer chemotherapy coaches, and her essay, Telemarketers Intrude No Matter Where We Go, appeared in the My View section of The Buffalo News (July 2005). Her short story, My First Call, was chosen for publication by Pilcrow & Dagger (Sept. 2015). Terri has also written several book reviews. Bob and Terri reside with their daughter in a small rural community outside of Buffalo, New York. They visit their son, daughter-in-law and granddaughter in Florida to recharge their spirits.
Product details Paperback: 358 pages Publisher: CreateSpace Independent Publishing Platform (January 15, 2013) Language: English 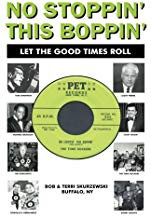 You're viewing: No Stoppin’ This Boppin’: Let The Good Times Roll by Bob Skurzewski and Terri Skurzewski $19.95
Add to cart