Description My childhood memories of Christmas aren’t warm and fuzzy. The holidays were more of a nuisance for my parents than cause for celebration. This is not to say that on behalf of their only child they didn’t give the season a halfhearted try. There were Christmases when I found under the tree an electric football set, a Daisy pump air-rifle and a basketball goal that never got nailed up. But, there were also mornings when apples, oranges, hickory nuts and a hammer signified that year’s bounty. Which is to say that Christmas in our household was mostly a wait-and-see proposition. I was finally ready to record an album of original Christmas songs. With Dan Knobler producing and some very gifted musicians and vocalists lending their talents, the making of the album Christmas Everywhere ranks as some of the most enjoyable recording sessions I’ve ever experienced. The record was close to being finished when it occurred to me that to set the tone for the albums mostly irreverent subtext, I needed to compose a lyrical prelude. In honor of Clement Moore, who wrote the poem we all know as, “The Night Before Christmas,” I came up with a short piece called “Clement’s Lament (We’ll See You in The Mall)”. Tania Hancheroff and Kim Keyes stopped by the studio and performed the tune with Jordan Lehning’s orchestral backing and the album was pronounced complete. Seasons Cheer, Rodney Crowell Crowell, Rodney – Christmas Everywhere (Vinyl) Catalog # : LP-NW-5271 Artist : Crowell, Rodney UPC : 607396527113 Label : New West Records Street Date : 11/2/2018 Genre: Folk, World, & Country Style: Holiday Tracklist: A2 Clement’s Lament (We’ll See You In The Mall) A2 Christmas Everywhere A3 When The Fat Guy Tries The Chimney On For Size A4 Christmas Makes Me Sad A5 Merry Christmas From An Empty Bed A6 Very Merry Christmas B1 Christmas In Vidor B2 Christmas For The Blues B3 Come Christmas B4 Let’s Skip Christmas This Year B5 Christmas In New York B6 All For Little Girls & Boys 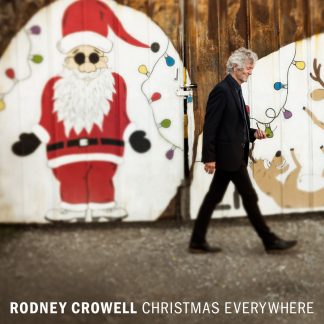