DESCRIPTION Limited vinyl LP pressing of this album by the rock icon. This re-issue is fully remixed and remastered to return the audio to it’s original glory. Package includes fully restored original artwork. Roy Orbison’s Many Moods was originally released in May of 1969. Among the standout tracks is ‘Walk On.’ This song is a prime example of the genius of the songwriting duo Roy Orbison and Bill Dees were. The sound captured here is unmatched, having been recorded with a choir and orchestra totaling forty-five people in the studio. ‘Walk On’ was a Top-40 hit in the UK, while ‘Heartache’ peaked at #44. Roy Orbison was best known for his trademark sunglasses, distinctive, powerful voice, complex compositions, and dark emotional ballads. His greatest success came with Monument Records between 1960 and 1964, when 22 of his songs placed on the Billboard Top 40. Orbison’s vocal instrument bridged the gap between baritone and tenor, and music scholars have suggested that he had a three- or four-octave range. The combination of Orbison’s powerful, impassioned voice and complex musical arrangements led many critics to refer to his music as operatic, giving him the sobriquet “the Caruso of Rock”. UNI 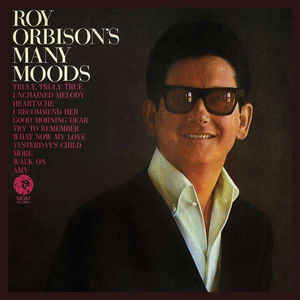