Among the most prolific musicians in the genre’s history, Max led Sepultura from Brazil to the world stage, making fans out of Ozzy Osbourne, Deftones, and Dave Grohl along the way. He cofounded Nailbomb, Cavalera Conspiracy, Go Ahead And Die, and Killer Be Killed, issuing album after album to spirited acclaim from critics and fans. But no project is as singularly identified with Max as Soulfly, whose gold-selling self-titled debut arrived with unrivaled determination and spirit. Produced by Max alongside Arthur Rizk (Code Orange, Ghostemane, Outer Heaven), Totem boasts guest appearances from John Powers (Eternal Champion), Chris Ulsh (Power Trip), and John Tardy (Obituary). It brims with the blackened thrash and death bite of modern Soulfly classics like Ritual and Archangel, with nods to the heavy merciless groove of Primitive, Prophecy, and Dark Ages. Roughly 25 years since the band began, essential Soulfly bangers like “Jumpdaf***up,” “Back to the Primitive,” “Downstroy,” “Eye for an Eye,” “Ritual,” and “Dead Behind the Eyes” are celebrated live just like Cavalera classics “Roots Bloody Roots,” “Refuse / Resist,” “Territory,” and “Dead Embryonic Cells.” Bursting with hunger and energy forged by more than three decades as a heavy metal force, Totem is a suitably brutal, vibrant, extreme, and uplifting entry into the Soulfly canon. Soulfly’s savage anthems of aggression push extreme music to it’s bludgeoning limits while injecting it with brilliant moments of trippy nuance and dissonance. Like all innovative musical heroes, Max makes anthems for the people. Soulfly is a celebration of family and legacy. Whatever Max Cavalera hammers out on the bridges of his four-string guitars, it always sets souls free. %00 Gold US indie exclusive 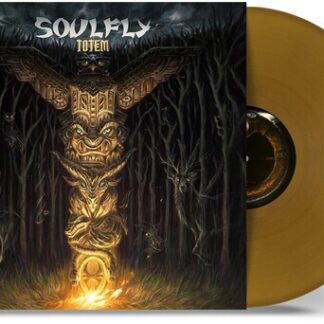