Steve Earle was nineteen and had just hitchhiked from San Antonio to Nashville in 1974. Back then if you wanted to be where the best songwriters were you had to be in there. Guy Clark had moved to Nashville and if you were from Texas, Guy Clark was king. A few years later, Steve would be playing bass guitar in Guy’s band and flying high on what would become an indelible friendship of like-minded musicians who bonded in a kinship of stories told through song. Flash forward more than forty years to May 2016. Guy Clark had just succumbed to cancer after a long battle with lymphoma. Guy had lived with his disease and had continued to write songs until the day he died. He also painted, built instruments and owned a guitar shop in the Bay Area. According to Earle, “You hung around with him [Guy] and knew why they call what artists do disciplines. Because he was disciplined.” The same can be said of Earle. In the fall of 2018, Steve and The Dukes went into House Of Blues studio in Nashville and recorded GUY in six days. “I wanted it to sound live…When you’ve got a catalog like Guy’s and you’re only doing sixteen tracks, you know each one is going to be strong.” Earle and his current, perhaps best-ever Dukes lineup, take on these songs with a spirit of reverent glee and invention. The tunes are all over the place and so is the band, offering max energy on such disparate entries as the bluegrass rave-up “Sis Draper” and the talking blues memoir of “Texas 1947.” Earle’s raw vocal on the sweet, sad “That Old Time Feeling” is heartbreaking, sounding close enough to the grave as to be doing a duet with his late friend and mentor. You can hear little hints of where Earle came from. The stark “Randall Knife” has the line “a better blade that was ever made was probably forged in Hell,” which wouldn’t be out of place in a Steve Earle original. Also hard to beat is “The Last Gunfighter,” a sardonic western saga to which Earle offers a bravura reading of the chorus: “the smell of the black powder smoke and the stand in the street at the turn of joke.” But in the end GUY leads the listener back to its beginning, namely Guy Clark, which is what any good “tribute” should do. GUY is a saga of friendship, its ups and downs, what endures. We are lucky that Earle remembers and honors these things, because like old friends, GUY is a diamond. NEW WEST RECORDS – STEVE EARLE & THE DUKES – Guy (Vinyl) 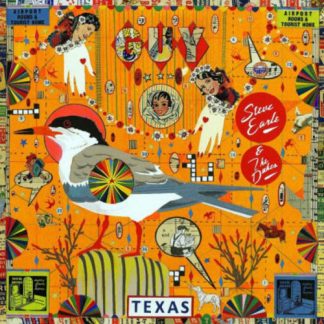