Van Zandt, Townes – For The Sake Of The Song (Vinyl)

DESCRIPTION
Townes Van Zandt wrote songs with an uncommon grace and poetic clarity, and he sang them with a voice that was at once straightforward, eloquent, and mindful of the arid beauty of his images. A decade after Van Zandt released his first album, there would be dozens of singer/songwriters following his example, but he was a rather unusual commodity when for the Sake of the Song was released in 1968, and the album’s production and arrangements occasionally suggest that Jack Clement and Jim Malloy didn’t always know what to make of what he brought them. The 11 songs on Van Zandt’s debut are all fine stuff (even the throwaway novelty Talkin’ Karate Blues at least brings a chuckle), and the emotional force with which Van Zandt delivers (Quicksilver Daydreams Of) Maria, Tecumseh Valley, and the title tune belies the fact this was his first album. But on several tracks Clement and Malloy attempt to match the elusive mystery of Van Zandt’s music with overblown accompaniment and deeply echoey recording, especially the cheesy chorus on the Velvet Voices, the clichéd Western accompaniment of I’ll Be Here in the Morning, the tinkling keyboards on Sad Cinderella, and the rattling percussion of Waitin’ Around to Die. In spite of the occasionally misguided production, for the Sake of the Song remains a classic debut. These songs make clear that Van Zandt’s genius was already fully formed, and as both a composer and a performer he was a man of rare gifts; even when the backing threatens to drown him out, his gifts come shining through, and for the Sake of the Song was an auspicious debut offering from a talent of the first order.

For the Sake of the Song
Artist: Townes Van Zandt 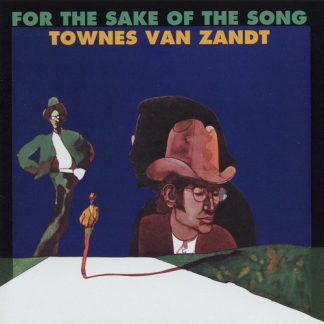