During the peak years of the ’60s garage band wave, Pete Wright was one of the nation’s top independent record promotion men. His records were not only hits on Chicago’s crucially important WLS but also in small markets throughout the Midwest. Whether in the Windy City or in these smaller outposts, he was tipped off to tons of untapped local talent. So much so that launching a record label was the next logical step. Thus was born Quill Records, a short-lived but supremely cool label heavily indebted to the garage band sound.This definitive overview collects only the most rockin’ sides from the label; from the Malibu’s who manage to outdo their idols the Animals, at least in pure unbridled energy, to the Skunks who on their overdriven, fuzzed-out cover of “Do the Duck” could be mistaken for a UK mod/freakbeat act. And that’s just for starters in a set of teen rave-ups from the likes of the Delights, the Commons, Ltd., Chances R, the Riddles, and more.If the appearance of the Don Caron Orchestra in the track listing causes serious head scratching among the more discerning of you garage connoisseurs, well, we couldn’t help ourselves. Their “Hot Pastrami” may be the most scorching sax ’n’ reverb instrumental you hear all year.This set also includes rare photos, label scans and extensive liner notes (with interviews from both Pete Wright and many of ­the bands). RAVES:—RECORD COLLECTOR? ? ? ?”Chicago was as swept up in the garage phenomenon as any US outpost, but it took visionaries such as record plugger Pete Wright to draw together talent from the Windy City and beyond, and turn it into a kind of palpable presence; which is, thankfully, what this 19-tracker ably demonstrates. (19-tracks on CD, 16 tracks on LP).Billed as “the rockier sides” of his Quill label, there isn’t much here that slips below frenetic. Here’s a label indebted to The Animals and Kinks and, when The Skunks (who pipped The Turtles to the post with their name, fact fans) take on Jackie Lee’s “Do The Duck,” it’s almost freakbeat territory.Highlights are many – The Commons, Ltd track which gives this comp its title is a vibrant burst of youth, while the sublime “I’m Cryin’” by The Malibu’s (sic) is a grand choice for an opener. The weirdest cut is from The Skunks once more: “Don’t Ask Why,” which fuses what sounds like an oriental chant faded in and out of the stripe-suited combo’s fuzz.What better way to end? Pete Wright went on to bigger things behind the New Colony Six, but we should be grateful he found homes for these tunes first.”-Jake Kennedy Redeye 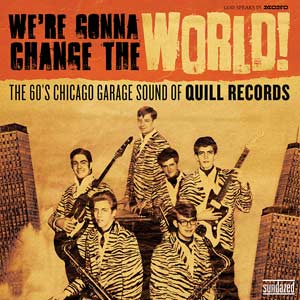